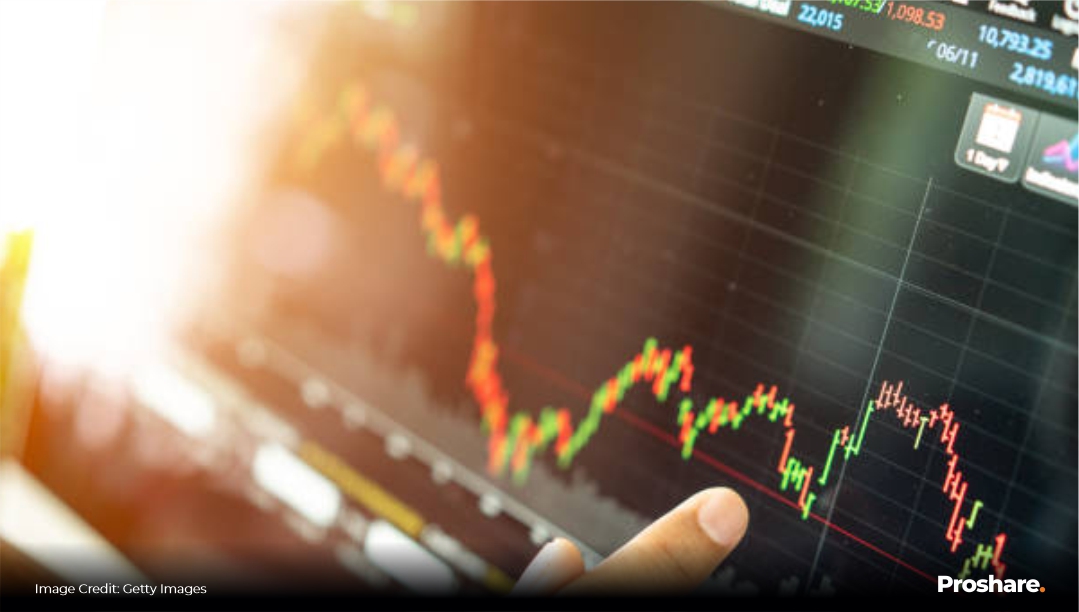 Emerging market (EM) sovereigns are closer than their developed market (DM) peers to restoring fiscal balances to the levels before the Covid-19 pandemic, but fiscal consolidation in both groups may slip as the global economic outlook darkens, says Fitch Ratings.

EMs as a whole are closer than DMs to reversing the loosening of public finances seen in the pandemic. This reflects a number of factors, including the more modest scale of their fiscal stimulus, the role of financing constraints in EM curbing spending, and the boost to tax revenues in some EMs from high commodity prices – as well as inflation more broadly. 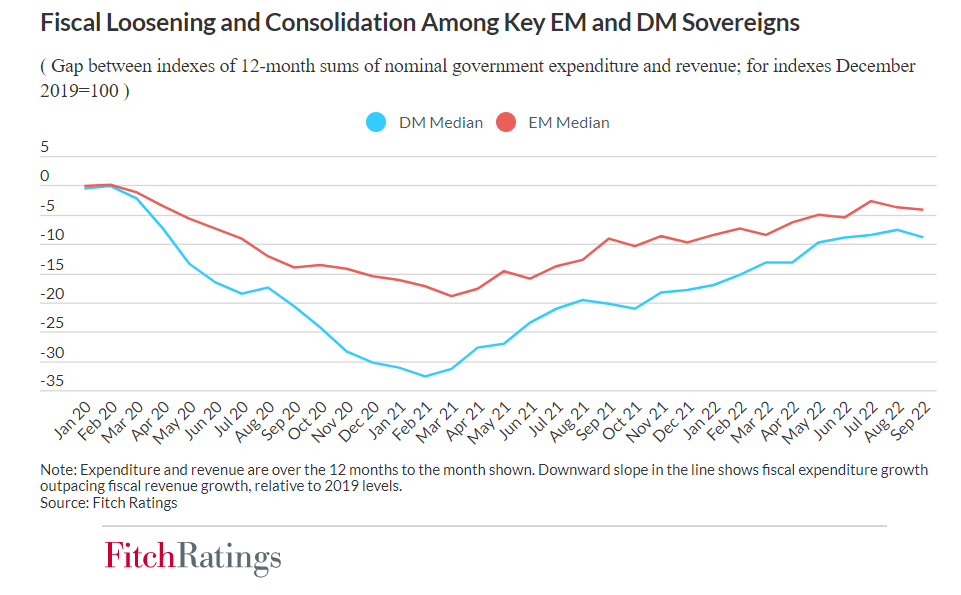 In many DMs, government expenditure surged as authorities responded to pressures associated with the pandemic, but subsequently fell back as these eased. However, spending over the 12 months to September 2022 remains well above 2019 levels in Germany (AAA/Stable), Japan (A/Stable), Spain (A-/Stable) and Taiwan (AA/Stable). Spain and Taiwan have also seen strong revenue growth. Slower revenue increases in Germany and Japan have contributed to the deterioration in their fiscal positions since 2019 – albeit from a starting point of surplus in Germany’s case.

Among EM sovereigns, those in the Middle East and Africa (MEA) and Latin America (Latam) are outperforming. In both regions, growth in revenue relative to 2019 has outpaced growth in spending, contributing to an improvement in the median general government deficit position. This has been supported by robust nominal GDP growth in Latam and MEA, and in some commodity-exporting nations, by fiscal inflows associated with high commodity prices. Spending restraint, in many cases exacerbated by financing constraints, has also played a role. Uganda (B+/Stable) and South Africa (BB-/Stable) in MEA, and Brazil (BB-/Stable), Chile (A-/Stable) and Peru (BBB/Negative) in Latam have made particularly notable progress in consolidating fiscal accounts after significant fiscal loosening during the pandemic. 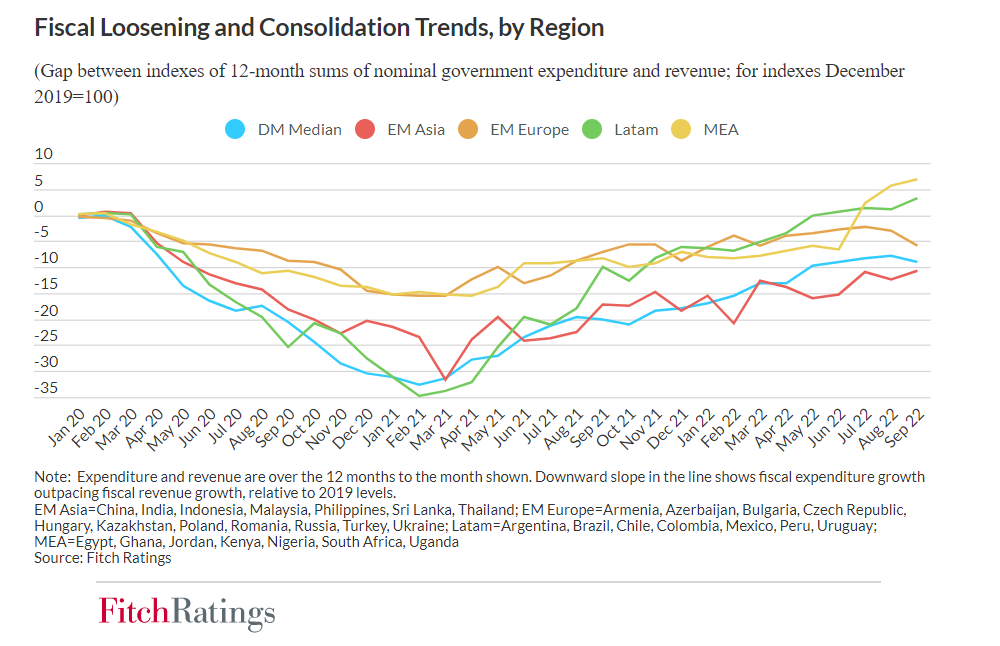 Asian EM sovereigns have made the least headway of any region in reversing the fiscal loosening seen during the pandemic, but performance within the group has been diverse. Indonesia (BBB/Stable) loosened public finances significantly in 2020-2021, but will be one of the few APAC sovereigns to return to pre-pandemic deficit levels in the next few years. By contrast, Thailand (BBB+/Stable) and the Philippines (BBB/Negative) have made less progress on consolidation after their stimulus efforts, though Thailand’s starting general government balance in 2019, at a surplus of 0.4% of GDP, was stronger than the Philippines’, which had a deficit of 1.7%. Meanwhile, China (A+/Stable) has again appeared to loosen fiscal policy in recent months, reversing the consolidation seen in 2021 while India’s (BBB-/Stable) subsidy support has slowed the pace of consolidation this year.

The median level of fiscal loosening among EM sovereigns in Europe during the pandemic was comparatively mild and largely reversed by end-1H22. However, there has been renewed fiscal slippage in 2022 in Russia (not rated) and Ukraine (CC) amid the war between these two states. The budget balance in Turkiye (B/Negative), which improved in 1H22, may deteriorate in 2023 as weaker economic activity reduces revenues while higher salaries, and pension and interest payments lift expenditure.

Fitch expects the pace of fiscal consolidation to slow in many sovereigns in 2023, with roughly a third of our rated portfolio seeing wider deficits or smaller surpluses than in 2022. The lagged impact of inflation on public spending, as well as government policies to mitigate the impact of high inflation on households and corporates, will put upward pressure on spending. Meanwhile, weaker global economic growth will weigh on revenue increases.

Nigerians Next Step: From Frontier to Emerging Market

Monetary Policy Response in Emerging Market Economies: Why Was it Different this Time?