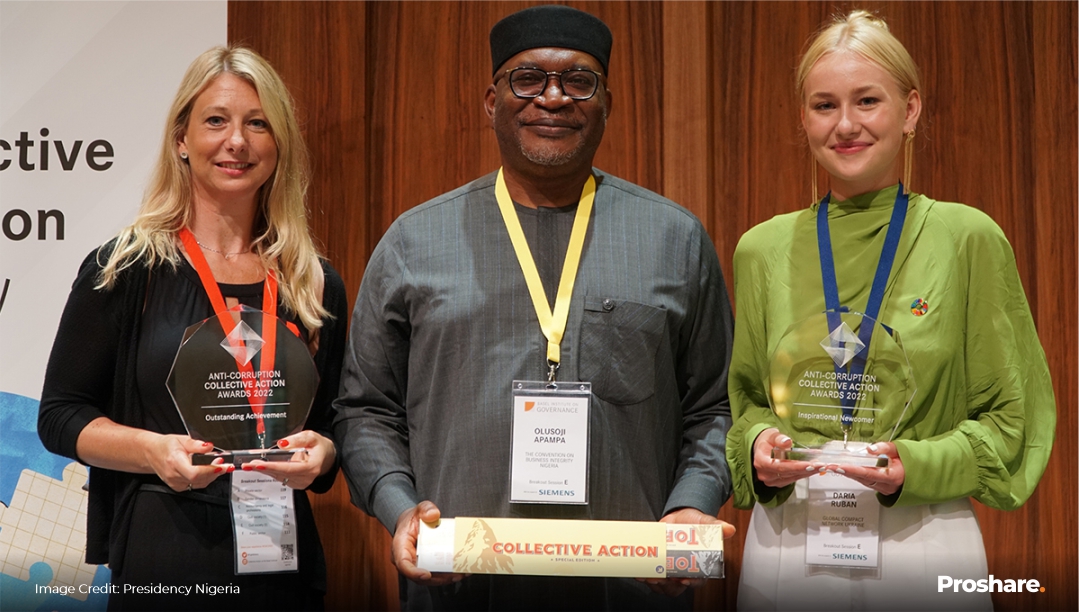 The Federal Government's collaborative efforts with the private sector and a Civil Society group - The Convention on Business Integrity (CBi), to curb corruption at the Sea-Ports has earned international praise and won the first ever "Outstanding Achievement in Collective Action Award" of the Switzerland-based Basel Institute on Governance.

The joint efforts of the Federal Government agencies - including the Nigerian Shippers Council, ICPC, DSS and the Nigeria Ports Authority, NPA, the Technical Unit on Governance & Anti-Corruption Reforms, TUGAR, alongside the CBI, through the Maritime Anti-Corruption Network (MACN); the cost of a ship berthing in Nigeria - often aggravated by unreceipted extortions - has now fallen from US$150,000 per vessel that arrives in the country to about US$20,000.

This was disclosed when a delegation of the CBi paid a courtesy call on Vice President Yemi Osinbajo, SAN, at the Presidential Villa, Abuja, yesterday.

According to Mr. Olusoji Apampa, who made the disclosure, the success recorded is now attracting international reviews. Countries such as Egypt, Ukraine, and India plan to adopt the "Nigerian miracle" model to produce similar gains in their ports' operations.

The international award recognized the work of the Nigerian MACN, which created a real-time-based Help Desk to resolve complaints and concerns of shipping companies as soon as they berth at the ports.

The Swiss-based international body recognized the initiative for collective action where government, business and civil society have worked together for change. This was made possible by the establishment and success record of the first-ever, real-time Anti-Corruption Help Desk in Nigerian Ports, which instantly reports and resolves corruption-related issues.

During the courtesy call on Monday, the CBi presented the international award to the Vice President and said to him, "this would not have been possible without your interventions."

Receiving the delegation and the award at the Presidential Villa, the Vice President praised the CBi and the MACN, commending them for their efforts alongside FG agencies, noting that the Buhari Administration will continue to support initiatives that improve the business environment and economy in general.

"This is cheery news on our anti-corruption efforts," a delighted VP said, adding that staying focused in the fight against corruption is required.

Prof. Osinbajo stated that the narrative on the imperative of integrity and the fight against corruption has to be deepened, explaining that "we need to get the attention of the young people also. This is something we have to do."

In addition, the Nigeria Ports Process Manual (NPPM) was launched, and the PSTT, led by the Shippers Council, was responsible for implementing and enforcing compliance.

According to the MACN, before the PSTT was formed, 266 cases of demands for large, unreceipted cash payments by officials at the ports in vessel clearance.

In the same vein, before the intervention of the PSTT, Port Calls cost an average of US$150,000 per vessel per visit (including illicit demands and delays occasioned by trying to avoid the illegal demands). This has now dropped to an average cost of US$20,000 per port call.

The group further noted that since the FG instituted the Help Desk in 2020, it has monitored just under 700 ships' arrival at Nigerian ports.

Also, it would be recalled that the VP Osinbajo-led Presidential Task Force was established in 2019 to address the issue of port congestion in Apapa and resolve traffic gridlock in the axis.

After completing its assignment, it handed over duties to the Lagos State Government in 2021.

Communique and Highlights from the MACN CBI Webinar on &quot;Corruption at the Nigerian Ports&quot;